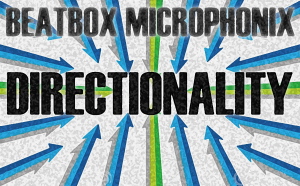 TyTe explains directionality in this first part of a series looking at the difference between microphones.

I often get asked, "What is the difference between a Shure SM58 and a Shure Beta58?" Well, apart from a pile of cash, they have different characteristics. The first characteristic we are going to look at is the Directionality of microphones. Every microphone has a specific Pick-up Pattern or Polar Pattern. As we will see, this has nothing to do with the snowy imprints of large, white, seal-eating bears!

Nearly all microphones fall into one of four categories where directionality is concerned:

Omni (means all) and so Omnidirectional microphones pick up sound from all directions. This is shown in the polar pattern like this: 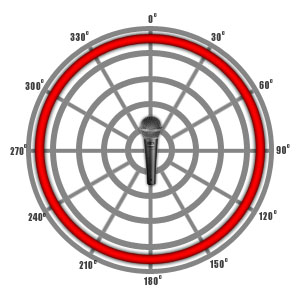 Clip-mics - usually clipped to a shirt or lapel of presenters on stage or television - are omnidirectional. They pick up sound from all directions. It does not matter which way the microphone appears to be pointing - the sound pick-up is the same. However, they are susceptable to wind noise (the noise created by breath hitting the diaphragm of the microphone) from one direction. To prevent this, clip mics are often clipped upside-down so the top of the microphone is pointing away from the mouth of the person!

Because omnidirectional microphones pick up sound from all directions, they are particularly susceptable to picking up the sound from loudspeakers or stage monitors and this can cause feedback.

Cardioid literally means heart-shaped and describes the polar pattern as we can see in the diagram:

Cardioid microphones are sometimes called unidirectional. This means they mostly pick up sound from one direction (the front), some sound from the sides, and none from the back. It is by far the most common type of directionality found on stage microphones. The Shure SM58 and Behringer XM8500 both have Cardioid pick-up patterns.

Because Cardioid microphones do not pick up sound from the back, they are used where the sound amplification is coming from in front of the performer, such as stage monitors or front-of-house speakers. I'll say more about this later in the article.

Microphones with a bi-directional or figure-of-eight pick-up pattern pick up sounds from the front and back but not the sides, and have a polar pattern that looks like this:

They are great for situations where you need to pick up sound from two sources but do not want unwanted sound coming from the sides. For example, a microphone placed between two instruments or to capture a conversation between two people on a busy street.

Some microphones such as the AKG SE300B come with attachable heads called capsules. These capsules change the pick-up pattern:

Other microphones such as the Shure KSM44 have a switch to choose a particular pattern:

The Shure KSM44 has a switch to select pick-up pattern

If there is one enemy of beatboxers then it is feedback. Feedback can ruin a gig as well as the ears of the people standing close to the speakers!

Feedback is caused by the microphone picking up the sound from the speakers. The sound loops around the system and each time it is amplified. This is why feedback starts off quiet and then gets louder. Feedback often occurs at a pitch, tone or note that depends on the size and dimensions of the room (this is called the rooms resonant frequency).

Cupping the microphone with your hand or fingers (as we beatboxers often do) has a dramatic effect on the directionality of the microphone. Rather than restricting the directionality, it actually widens it! For example, if you cup a Shure SM58, it turns it from a cardioid/unidirectional microphone to an omnidirectional microphone. This means that it now picks up sound from all directions and will pick up sound from the speakers or stage monitors. This is why cupping the mic may make it ring or squeal. So, it becomes a balance between the extra punchiness/loudness you get from cupping the mic, and being prone to feedback.

It is also important to match the microphone that you are using with the monitoring system that is used. Because omnidirectional microphones pick up sounds from all directions, they are prone to feedback. Hypercardioid micrphones are more directional and are less prone to feedback. In fact, in many situations you will find the Shure Beta58 feeds back less than a Shure SM58.

Think about where the sound is coming from and what the pick-up pattern of the mic is. Imagine you turn up to a gig and the on-stage monitors are at each side of the stage. Will you use your SM58 or Beta58?

How to Rock a Crowd