Behind the Scenes: Grand Beatbox Battles 2016

Behind the Scenes at Grand Beatbox Battle 2016

This past March, I had the pleasure to travel to Basel, Switzerland for the 2016 Grand Beatbox Battles. It was an incredible trip! I met top beatboxers from around the world, as well as seeing American beatboxers like Kenny Urban, who took the title, making for a second consecutive American win.  I also witnessed a ton of behind the scenes stuff that few get to see, so I thought I’d share some of them.

I arrived in Basel Friday afternoon, in time for the first day of GBBB, where I met up with BBK. After some guesswork, we made it to the Youth Hostel. The staff was very polite, even with the crowd of beatboxers loitering in the lobby. We waited for our rooms to be open while chatting up most of Europe’s premiere beatboxing talent. Afterward we walked to the venue and watched amazing beatboxing. 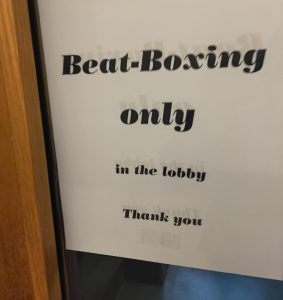 On the second day of GBBB, this sign was put up. Apparently, it only took one night of a hostel full of beatboxers for the staff to take action from noise complaints.  The sign had to be replaced multiple times, because “someone” was ripping the bottom half of the sign so it read: “beat-boxing only.” Hehe.

Speaking of the hostel, recognize this room?

If you are a subscriber to Beatbox Television you should. It’s the entertainment room in the basement of the hostel, but you know it as the room where Adam Andrew Corre films the majority of his GBBB videos. At one point, to get rid of all the beatboxers, the hostel staff just left the room open for us. A few nights, it became the hangout room. BTW, the pinball machine doesn't work and we could never find the ping pong balls and paddles. Though we did play beatbox ping pong… (that's making the ping pong noise without an actual ball or paddle). 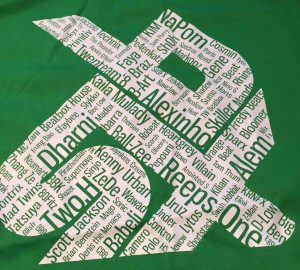 So one thing I got on my trip was this shirt. It is the famed swissbeatbox all-star logo, but with a lot of new names. This was a specially made shirt for the event, based on a Facebook post on Swissbeatbox’s fan page asking which names should be put on, which didn’t get much response. Most of the names were of Indonesian and North American beatboxers in the post, many of which made it to the design. That said, this is not the new all star logo, at least not officially.

Though Pepouni is selling the new shirt at events, this does not mean it will replace the current All Star logo found at the beginning of all the Swissbeatbox videos.

Anyways, I posted that photo to Instagram and damn, the response was immense. It was ripped from my account and reposted like crazy. But what was scary were the not-so-positive responses. Many who didn’t make it on the logo, of which there are tons of (its one shirt, you can’t fit everyone), complained in ways both nonsensical and somewhat terrifying.

Beelow gave me his plaque

So Saturday night, after the conclusion to Grand Beatbox, Beelow, Adam of BTV, Honeycomb and I were walking back to the Hostel. Beelow, if you never met him, is a funny dude; he had us laughing the whole way back. Beelow was teasing both Honeycomb and Adam for having such cute (read: tiny) YouTube channels. For laughing at that, Adam reminded me that I (We Talk Beatbox) had even less subscribers.

Halfway back, BeeLow had to tie his shoes. He was carrying his cell phone and the judges plaque and asked me to hold the plaque while he tied his shoes. Thinking I would play a trick on BeeLow, I pretended to steal the plaque; ran off a few meters yelling, “Haha it’s all mine” or something stupid like that. 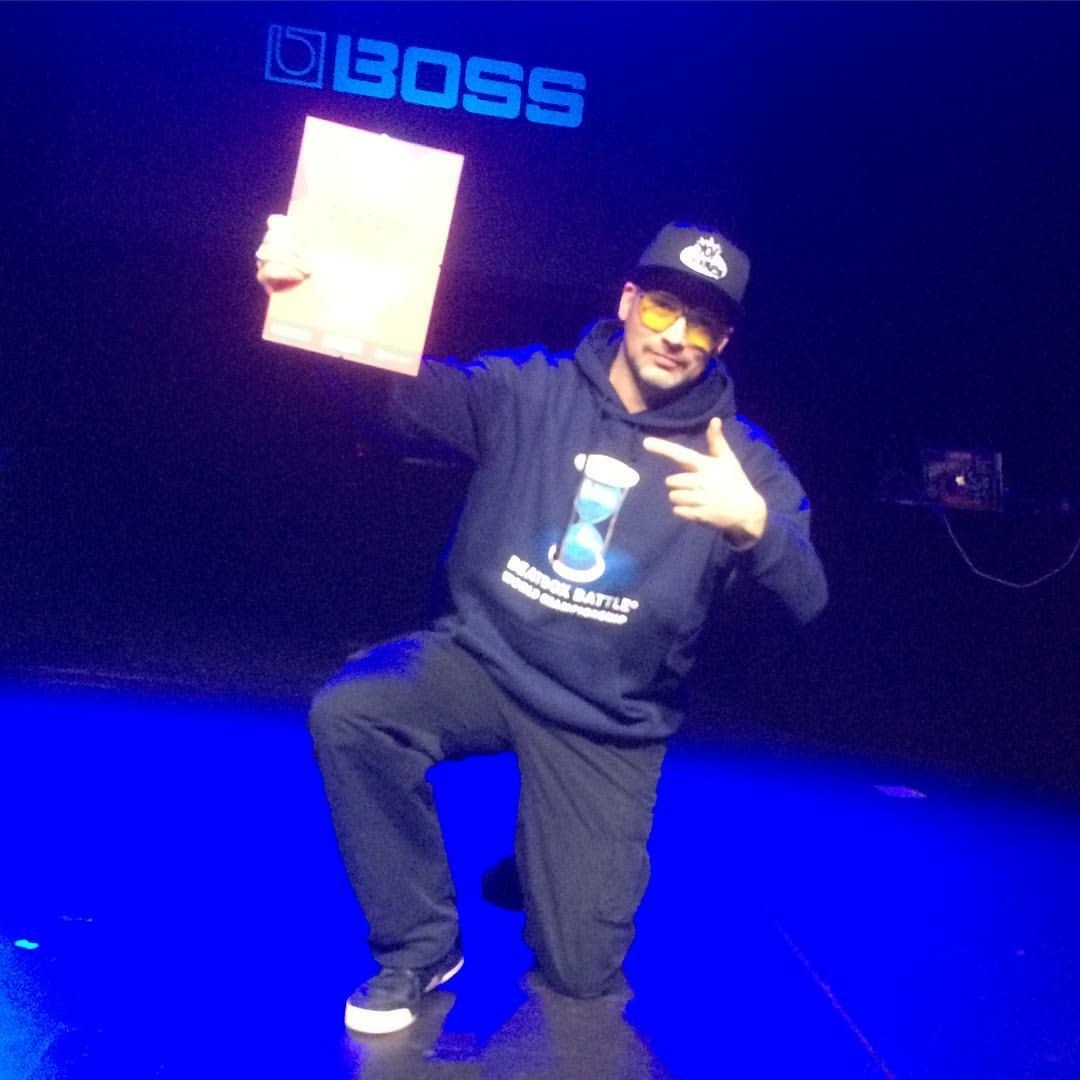 When I walked back, Beelow said, “Oh did you want it, you can have it. Oh I don’t need to have it, you take!” I didn’t know what to say to that. I had no room in my luggage to carry anything more and had another week and a half in Europe. So Beelow kung fu’d my joke back at me and I had to carry this plaque across Europe. Thanks Beelow. At least it looks good on our new set!

I made my Swissbeatbox debut, and as a judge. On Sunday, the third day of GBBB, they held the 7 to smoke battles. Maybe because of the added tag team category to the battles, they couldn’t hold 7 to smoke in the main venue, so it was held in a smaller venue. And EVERYONE wanted to compete, as this was their chance to make a battle featured on Swissbeatbox. There were some 70-80 beatboxers that went through elimination. This meant that there were only a few who didn’t want to compete, so Pepouni was light on possible judges since many who could judge had left Basel that day. Pepouni asked me if I wanted to judge. I said no. He said it would help him greatly. I said maybe. He said please. I said fine. 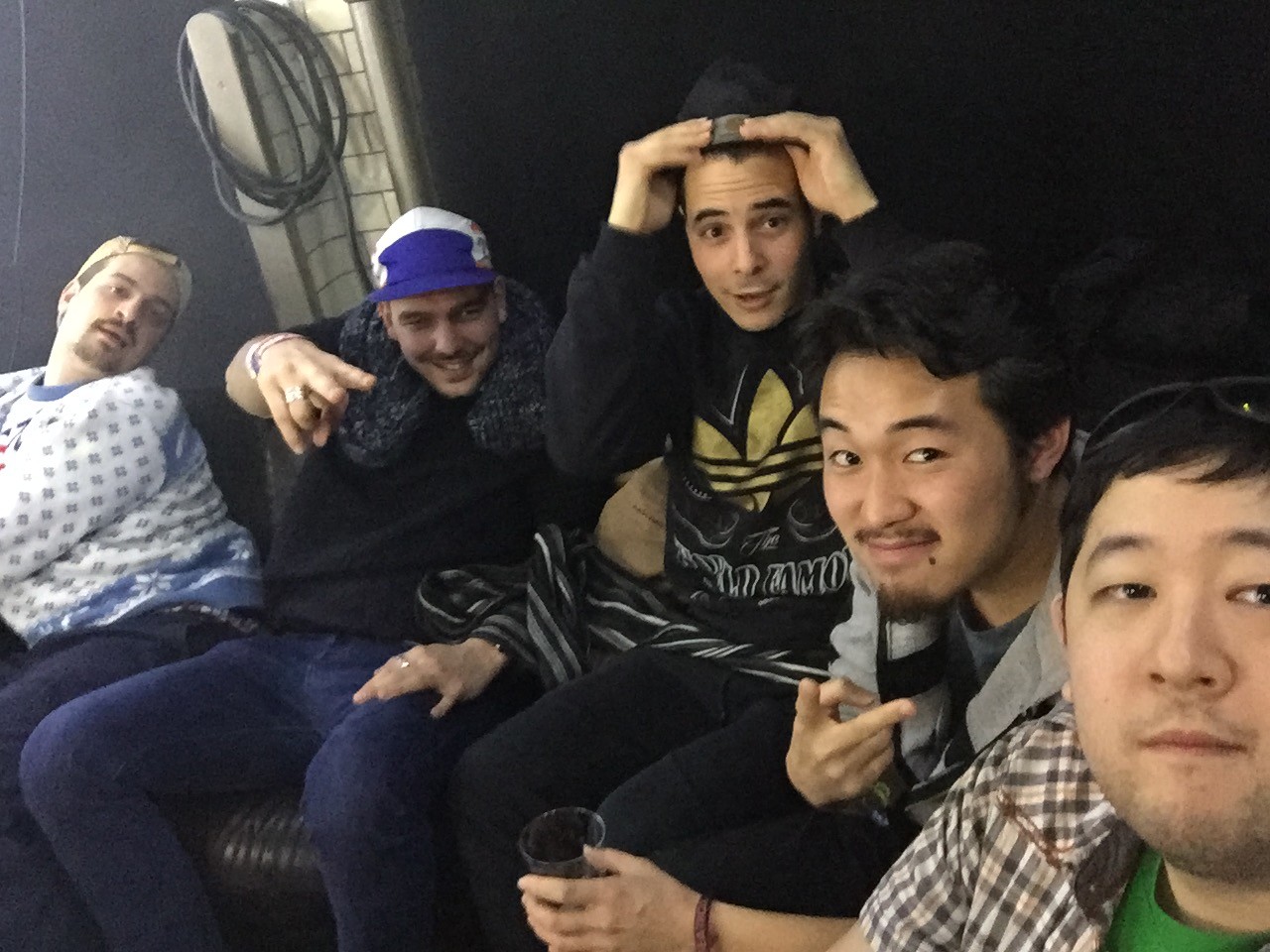 So I ended up judging for the first time. The other judges being Babeli, Funkaztek, BMG and Gene. It was fun but scary, as I was literally grading my friends.

As far as the battle, I had a lot of trouble choosing who won, as the level was so high, but if you want to dispute my calls I would love to talk it out.

And as to the ones who didn’t make it: Samy Try was high on the list, Gene and I both wanted Amit into the battles, and Recognize (Jonathan Keith) made at least three of the judges’ lists.

Among the people who made 7 to smoke is Napom, and I am sort of embarrassed because I don’t remember what he did in his elimination music-wise, but not without reason. (Here is a picture the day after 7 to smoke.) 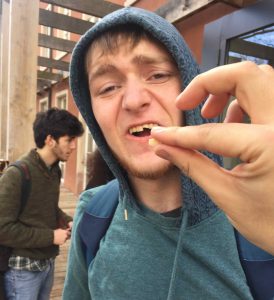 So the story goes: Napom’s front tooth/teeth are implants that he had when he was young. While in Europe, one of his fake teeth had come loose, and prior to 7 to smoke had popped out while doing a pf snare.
Mind you that Gene and I did not know about any of this. Napom gets on stage, does a beat, and stops, going “aw I Hit my tooth” and proceeds to place his tooth on the table in front of me and Gene, freaking us out completely. I remember he did a cool beat, but damn if I’ll ever remember anything besides that tooth and whether what we saw was real or not.
The broken tooth didn’t helpNapom though, as it caused him to do a siren when he wasn’t trying to and messed with his siren when he did try. 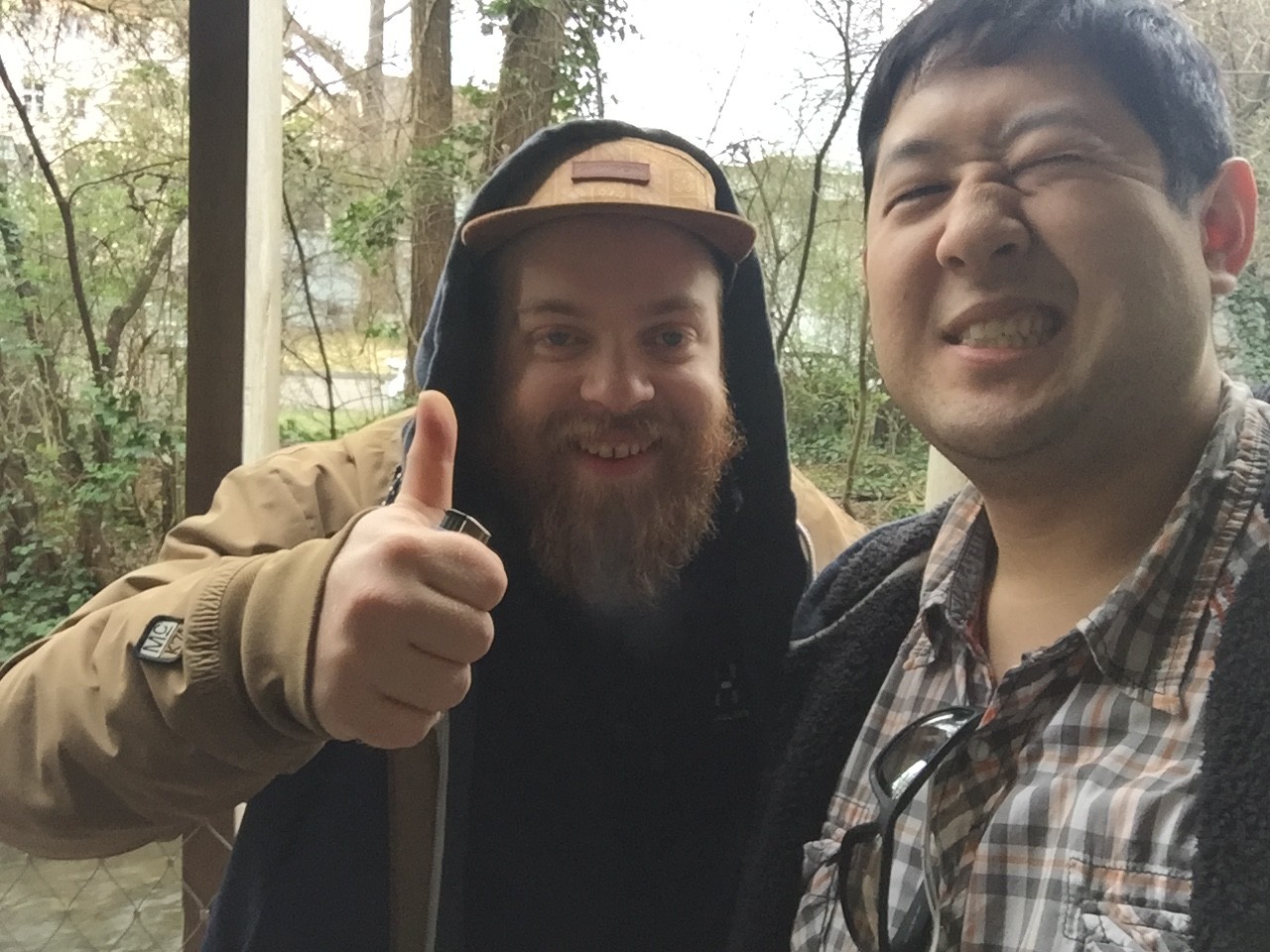 Overall, I had a blast in Basel, I highly recommend going. If you want to see more behind the scenes stories and videos, check B-art and Sparx’s channel. And for the Battles themselves, check out Swissbeatbox’s channel. Thanks for reading! 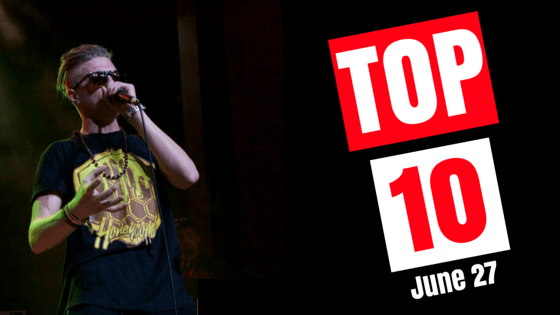 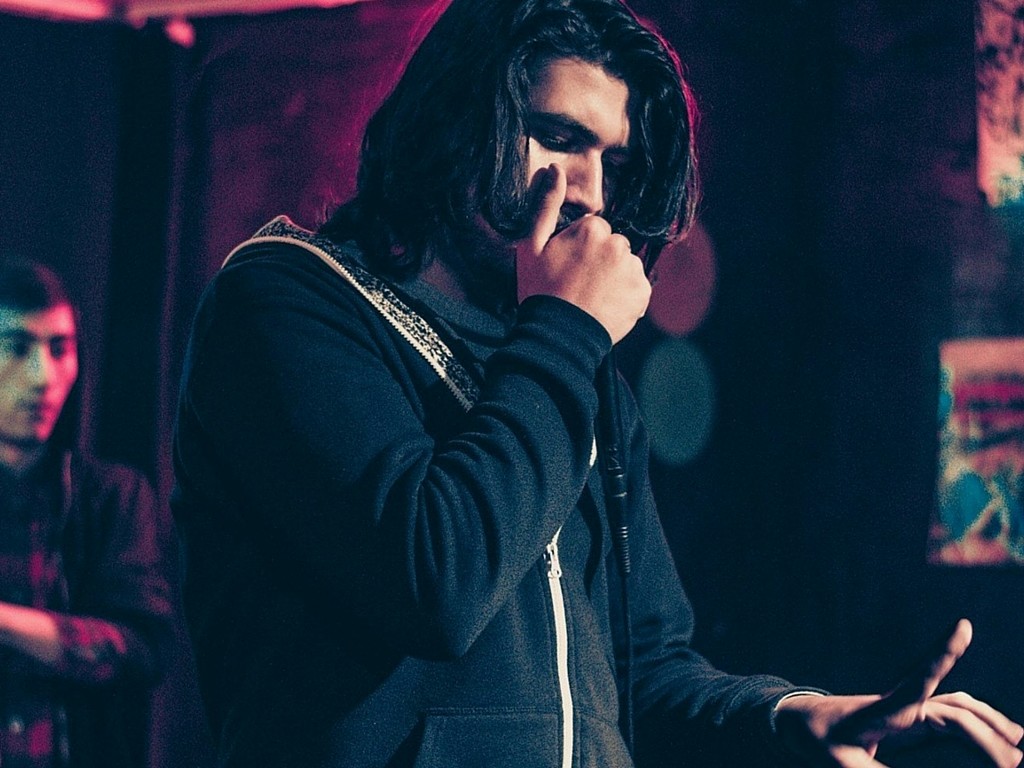 Who is Zer0? | Exclusive Interview