With three US tours under his belt and a new release, TyTe catches up with the MC, singer, beatboxer, instrumentalist and 'King of Funk' known as Carpetface. 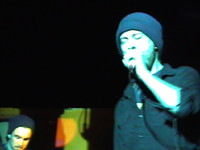 How did you and DJ Samo get together?

(Samo) We've been working on and off. We used to cross paths at various venues - if and when we were on the same bills. Carpetface We had a warm-up slot for Bez at Guildford and we got it together from that point onwards and have been making naughty noises all over the place.

How did you get into beatboxing?

The first things I started doing when I was a little kid. One way to keep bullies away was to do some beatboxing and they were like "How do you do that?" It started when I saw the film Crush Groove that's got the Fat Boys in it, and I'm 27 and was born in 77 so I was like really little when I saw it, and it had a big impact and there were a few of us in the school yard doing it from the age of 9 or 10.

When did you start using beatboxing in your live set?

I forgot about it for ages and then started having technical hitches when doing MCing and stuff. Sometimes the backing track wouldn't work and what do you do, tell jokes? I remembered about the beatboxing and started putting it back in the live set. It helps smooth things over and it's now something I do every day.

Is beatboxing a filler or an integral part of the whole sound?

It's a bit of both really. Even the best and longests beatboxing sets I've ever seen have not been very long. It's quite a difficult thing to do so I like to mix it up as part of the set. We have some songs that open with some beatboxing in, etc.

What's it like as a DJ working with beatboxing?

(Samo) It is all part of the band and keeps it within the elements of the culture. It's great because we can start off tracks with say the beatboxing and the scratching, and then the band come in, and then all the way through a lot of people are wondering which noise is coming from where whilst keeping it fresh at the same time. 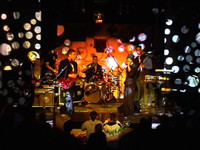 How is beatboxing used between songs?

(Carpetface) It keeps the continuity of the live shows - definitely. One thing I've always hated is when a guitarist is tuning up and it takes a little while, and there's nothing going on, and all you hear is 'dum, dum...dum', and everyone's just going, "Can you just play a track" and everyone's waiting. If you can beatbox and you've got scratching going on and stuff then you can just keep the vibe going. (Samo) If there's time fillers we sometimes battle each other on stage - if there's a spare minute - which is quite a long time on stage - so he just calls me out and we can try and out do each other.

How are the different percussive elements integrated between songs?

Normally we've got four percussive elements - we've got percussion, drums, scratching and beatboxing - and we can bring them out in ones or twos or all of them together for maximum effect and it keeps it entertaining. I don't like it if the audience goes off to the bar in-between a track. It's our job to make it so exciting for them the whole time on stage that they don't want to miss any of it.

Tell us about your record label?

It's called Newbias, and I put the first record out- The Friday Night Sniper EP - in November 2002, and started playing at The Warehouse Parties at the same time, in London. I worked with The Stereo MCs on the next one which was called Idiot Fool which I put out in late 2003. I've just put out the track Revolutionation that features the Freefall Collective from Bournemouth - they play on it and co-produced it with me, and I'm just getting an album together at the moment. 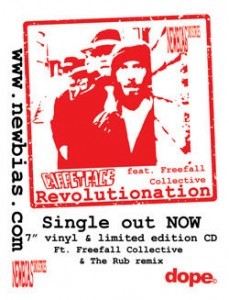 Do you write and produce all your own material?

The way it was running is that I already had a lot of stuff that was in my set, and sometimes I would do a set just over a CD with Samo scratching, or exactly the same set with the band. They were my session band I would take the guitar off them and say "It goes like this" and play all the tracks to them, but after six months of working with them, they came up with some music of their own that didn't really fit in the style of their own set - sort of on a disco tip - and so I started writing to that as well. So we've got some very collaborative stuff and some not so collaborative stuff where they're my musicians.

What are the benefits of working with a live band?

We can do an acoustic version of hip-hop stuff if we need to - and stuff like that - and to keep testing it out so when we record stuff we've got four or five versions: the remix, the hip-hop version, the laid-back version, etc. It's a really good thing to have a band. Not enough MCs get out there with a band and I think it's important. 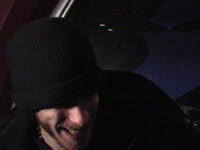 What are the benefits of working with DJ?

(Samo) There are two different spectrums. We have the live band but at other times it's just me and Carpet on stage. It's always great to have the full band there, but when we went to Berlin for a week it was just me and him everywhere, just turning up and doing a couple of shows each night. It was taking it back to the root form of DJ and the MC - no backing tracks, no nothing. It was good fun.

Why is variety important?

It's always good to mix it up and do the stuff where it came from and the stuff where you're going all at the same time. I don't think you should be just going through phases of 'just band stuff'. It's good to chop it all up and do all sorts of stuff. Definitely.

Information about Carpetface releases and tour dates can be found at his label: http://www.newbias.com