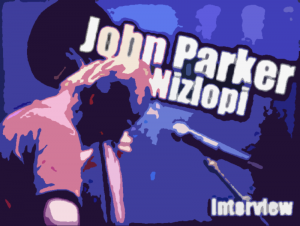 An exclusive interview with one half of the two piece acoustic band Nizlopi.

An Exclusive Interview with the other half of the two piece acoustic band Nizlopi!! Yes he plays double bass and beatboxes!!

I’m here with John Parker from the two piece band Nizlopi. Right, so first off the question that every beatboxer gets asked, how did you get into beatboxing?

(John umms and arrs) About .. maybe four or five years ago, we were playing a gig in Leamington Spa, our home town, and they put a mic up in front of me for no reason at all as I play double bass; and I thought well, that’s kind of odd, and then a string broke on the guitar and I just lunged to the mic and just did this beatbox, I just became the drummer. I can imagine it was fairly terrible, but I like to think it was really cool but it was probably really awful but lots of people said "oh that was really good", and then bit by bit it just kicked off.

So, is that what pricked your ears into getting it involved with the band?

Yeah, yeah I mean to be a bass player you have to learn a little about playing drums anyway so you can link in. Always, I would be sitting with drummers and they only communicate in hi hats and snares and you kind of learn the pockets and how to communicate on that level, so I think I had the vocabulary, I just had to get used to doing it.

On the website we have a beatboxer called BeatMuppet who plays a bass guitar with beatbox, so I wondered how did you learn to keep time with both your beatbox and playing the double bass? Do you use a metronome?

Umm, a real mix, I do a lot of metronome practice anyway and I do an awful lot of double practice, that’s the main thing hours and hours of that; and so the double bass takes care of itself so I can just concentrate on locking and if I over complicate the beatbox it detracts from the double bass; so yeah those sort of thing and always before we play I listen to particular different bits of pieces.

What do you think beatboxing brings to the band situation?

It’s just really exciting to see someone go up there and look like a normal person and make a sound and say “Jesus that’s a record”, like Scratch when you see him play and you think .. But how the hell is he doing that? I know when friends of mine have seen Killa Kela and he does that soul song in his new set and you sort of think 'that’s not possible', it’s like magic. I can link with my double bass like no drummer because I am the rhythm section so you have total control really.

Talking about your bass, Since you’ve got this enormous double bass in front of you, how do you approach your mic technique while beatboxing?

Erm, pretty bad actually (laughs) because I am constantly looking at the singer so I am on the side of my mic and find myself beatboxing out the side of my mouth but what is really good about that is that sound engineer will crank up the volume because it's lower volume so when you turn to face the mic loud and also if you cup the mic, which I can’t do now because we just get feedback. You can get loads of different effect, but yeah it affects both my double bass technique and my beatbox technique so it’s a compromise really.

What is the reaction like when people see you playing? If you see them after what do they say to adding the beatbox in?

Umm, a lot of people, including people in Radio and TV think there is a computer somewhere and you’re like (annoyed grunt) because I used to have a Line 6 loop station but because so many people used to think it was coming from the box, it was just like 'ah scrap that'. People, they just talk about the beatbox more than the double bass playing. There are really good beatboxers, you know and I hopefully what I am doing is also making people look for the really good ones.

So talking about crowd, what do you think the best crowd you’ve played to so far?

They all vary really, Lowlands in Holland which was a couple of weeks ago really kicked ass, and the audience actually came to the sound check and we were the first band on, on a Sunday morning and we thought no one would be there, but we sound checked and of course we always sound check the double bass first then the beatbox and we just spend ages getting that right and they just all came in their droves and so we sound checked which was really like a gig so we got to extend our gig and apparently we are the only band to have ever got away with 15 minutes extra there because they are very tight with their schedule. I say that and O2 was pretty good, we did the O2 Wireless Festival and that rocked too.

So, do you prefer doing it to bigger crowds or a more intimate environment?

Beatbox sounds great loud you know it just sounds really good loud, I mean we do a lot of acoustic-y stuff as well and it’s just so hard for your voice to project especially because you can’t cup the mic as I’m playing double bass.

What does singer Luke, think of the beatboxing? When you approached him did he say “What .. no!?”

I think he was the one who kept saying, you know, "go for it, go for it," and sometimes he is always trying to get me to do other things, umm he wants me to sing backing vocals sometimes too and like, I don’t think I’m gunna learn how to sing backing vocals, beatbox and play double bass at the same time, because I will have a break down at some point (laughs).

Do you have any advice for musicians who want to back up their playing with beatboxing?

Umm, just go for it, I think that’s one of the things when we work with especially young kids they are like embarrassed by the sounds they make, and I was too. I saw one or two really good beatboxers and I was really just like 'do I go up to them and say, "hey how did you learn that noise?"' You know, you constantly think, coming from a traditional way of learning music, that there is a particular way to do something. Your guy’s tutorials, I watched those and thought 'oh I really struggle to get that snare sound, but I have one of my own' and I think it's just finding your voice and just getting really good at what you have to offer, like Rahzel obviously sounds very much like Rahzel and wouldn’t it be sad if we all sounded like Rahzel, although it would be nice.

Talking about your sounds, because on your live show you're just doing the basic beat, but do you actually practice and get more of the technical stuff?

I wish I had the time, umm when we did some recording recently I did have to start metronoming my beatbox and start experimenting with, you know, getting sounds whilst breathing in and things like that, and trying to get like a low bass note for the bass drum. I would love more time to do that and I would love to get a portable amp and a mic and annoy the neighbours really!

Lastly, are you a member of Humanbeatbox.com?

So what’s your general opinion of the site?

It’s really good. I love the tutorials, I think that is the, I actually downloaded the Killa Kela interview recently which I think was shot in a Fopp store, it was just so good to see what he does because it’s quite hard for me to get to gigs at the moment, it’s just really good, one thing I would love if possible or I haven’t found is if they had a CD shop section as well because it’s hard to get hold of good beatbox CDs in the shops.

Right thank you John, very much and I will be here to enjoy the show.

For more info on Nizlopi visit Nizlopi.com or their myspace at www.myspace.com/nizlopi

The Phonetics of Beatboxing: References