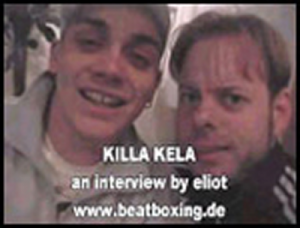 In an exclusive interview for Humanbeatbox.com, Killa Kela talks to Eliot about the beatbox community, future plans, and his new album, 'The Permanent Marker'

"I've been beatboxing probably since I was about 8 years old, 7 or 8 years old, really just working on just building a little sound library in my head.

"When I was younger it wasn't even called beatboxing, it was just something that I did and irritated my family. In time, where music comes along and starts giving you different energies, you just start making instrument sounds and stuff, so that's basically how it began.

"Yeah, my dad used to play the drums, he had a drum kit, I used to play about on that. My mum would listen to 80's rare groove, Michael Jackson, Stevie Wonder and Mo-Town, so I guess that's where I kind of drew inspirations from, but other than it was just a love of music really... basically!"

Kela on... the beatbox community

"I think its good, there's a lot of issues I do have. It's like, there's this thing, people just need to come with new stuff. And I know that's easier said than done, I mean I for one am one of these people that really needs to draw on something, like an experience to get inspiration, but when you work with other beatboxers you end up imitating other beatboxers, which isn't cool really because it's like a DJ copying another DJ's routine, or having exactly the same records as another DJ. It doesn't weight up right and what's important is for people, the audience, to see differences in styles and differences in sounds.

I had this conversation before, the Britney Spears 'Slave 4 U' that I do, I was talking to one guy who beatboxed and he was like "Shit, I can do that too", but it's not the point, the point is is that "you did it, you created that, not no one else". That's what it's all about, it's just coming up with new ideas."

"Right now in my head I'm re-inventing a few new sounds, so they don't sound like the sounds I was doing, because I think that's important. To re-cycle the sounds that you've got, rather than try and find a whole new thing to do with your mouth."

Kela on... the Permanent Marker LP

"It's building alongside other instruments, the albums's called 'Permanent Marker', it's coming out in England end of July, rest of the world September.

"Then there's the live show, which is weaved in amongst it to give that live feel and to kill any stoppages between tracks. For it to have a life feel, you've got to keep it rollercoasting. We never put any stops, and there's other features as well. Plus One, Fallacy, DJ Hype and Normski and all these different people that help create a kind of vibe feeling. Which is a lot more important, concentrating on an album rather on individual tracks to try and make it sell or something. I wanted the whole thing to kind of merge together.

"That's the thing we're working on at the moment, to be part of instrumentation. To be able to link it towards singing, link it towards other instruments, and really put it down as an independent instrument. With that in mind I've come up with a more mature name for it, building more foundations musically, and that's the multivocalist.

"I'm not really a huge beatbox fan, in terms of 'beatboxing' because its one of those nieches in hip hop, you say 'beatbox' and people say "What?" or "Oh, is that hip hop?". If you say "multivocalist" they go "What?" and you can explain it to them. It's a philosophy of, an extension of beatboxing, but what is actually."

"Live wise I'm going away as part Permanent Marker crew, which is myself doing the all manner of stuff, re-creating tracks from the album. We've got the Mixologists, DJ Go and Benny G on the turntables, we've got Kareem on the keyboards, bringing Akrobatik over, bringing Normski over, bringing Solo One. It's like an alternative band, re-creating tracks, so that's the way my live show is gonna go at the moment.

"In terms of me individually, that's gonna go through some changes as well I think, over the next month or two, in terms of it as a movement, in terms of where can I see the art-form going."

"There are some kids that I've seen that are really good. I blatantly say in my interviews how I do things, and the only reason I say that is because it keeps me on my feet, to come up with new stuff. It suits me fine, there's no mystery, there's no secret. Rahzel might wanna keep it a secret, but I'll pull his card!

"I think it's important that people grow up. It's no good one person holding the flag, do you know what I mean? There's no point me going out there, and leaving the door shut for everyone else, saying "this is something different". It doesn't make sense, but I speak to some beatboxers and all they turn around and say its a very hip hop thing for them, and they mimmick hip hop tunes, that people don't know. You gotta be able to mimmick other music to be classed as a musical instrument, for music, do you know what I mean?

"The sooner people get out of the "oh, this is hip hop, this is this or that", catagorizing it as "this is beatbox", it can be whatever you want it to be. For it to progress over the next few years, its gonna take a lot more than what we got right now."

"I'm not even gonna front. When I go and do shows I have my soundman Parker, he does my shows with me and my man can beatbox. There's no tricks or cheating, we EQ the microphone like you EQ a drum kit, and we make the best show possible.

"There's no cheating, there's no reverb, there's no funny business. You gotta be ready for that, and sometimes just walking around just beatboxing won't prepare you for that, won't prepare you for the impact, and there's a load of things you could be missing out on. If you don't try the mic at home, if you don't have a sound guy that knows what he's doing. My man beatboxes, my sound man beatboxes, he's a beatboxer, and it makes all the difference.

"Electronically, when it comes to doing stuff in the studio, don't be afraid to use the equipment. When it comes to live stuff, don't be afraid to use the equipment. But be honest, don't lie, don't be like "I'm not gonna use the reverb", when you really are using the reverb. Just be honest with people, because people dig honesty. They believe you. You switch off the reverb, they believe you. If you switch on the reverb, you tell them and they're cool with it. You just gotta be honest. I don't know whether I would use electronic equipment and stuff, I'd have to be really honest with it."

Kela on... some last words