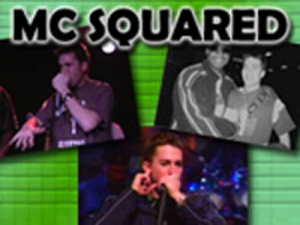 Squirt chats to the man behind the equation... 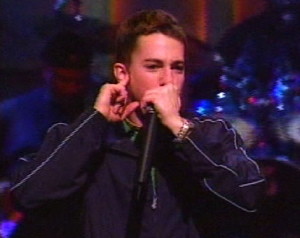 Like most other beatboxers who have been doing it for a while, I started before I knew what it was. I had never heard of beatboxing, never heard of Doug E. Fresh, and didn't know much about hip-hop. I just happened to hear some kid do it when I was 14 or 15, and it was the craziest shit I had ever heard. I was stunned. So I started practicing until I could hold down a beat. And at that point I was starting to listen to more and more hip-hop, and I learned more about beatboxing. The more I did it, the more I loved it. At this point it's practically my fourth leg.

Unbelievable. The energy in that building, the energy on the stage, it's like nothing else I've ever encountered. It sounds cheesy, but you really can feel the history and soul in that place, even when it's empty. It's very tangible. And everybody knows the audience in there has worked hard to earn themselves their reputation as the most ruthless crowd out there, so I was all kinds of nervous. Peeing every 30 seconds, sweating, etc. But as ruthless as they can be if they're not feeling it, the vibe and the energy of that audience when they WERE feeling it was one of the most powerful things I've ever experienced, beatboxing or otherwise. Unforgettable to say the least.

Did you think you would win it?

No. I definitely didn't expect to win the first time, and every time I won I was sure it would be the last. But I ended up winning 1st place in all 4 rounds of the in-house competition and becoming the Apollo Theater 2002 Super Top Dog, and then I went on to win again on the televised Showtime at the Apollo. Sometimes you can surprise yourself I guess. I sure as hell didn't see it coming. 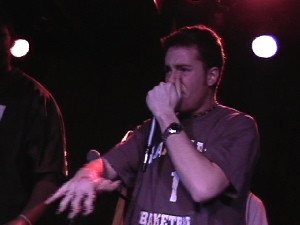 So you got your DVD out. What sort of stuff has it got on there?

My new DVD is a full-length solo live beatbox project. I kinda think of it more like a live album, but with a visual component to it. It's about 45 minutes long, comprised of footage I've collected over the past few years. The majority of the material is from 2005 shows, but I pulled a few older clips like freestyling with Wayne Brady in Las Vegas, the Apollo video, and a few others. There's a really nasty clip from Tokyo of me improvising with Gayo Nakagaki, a Japanese koto player. A few crucial friends helped out a lot with the production and the design, and the finished product is just dope. I'm very happy and proud of the results.

Will you ever be doing shows in the UK?

Sure. You seem like a decent bunch of blokes. And you make a mean bulldog.

Since there wasn't a network of beatboxers or too much released material out there when I started, I've taught myself how to do everything that I do. But Doug E. Fresh and Buffy blow my mind. There are a thousand beatboxers taking it in a thousand different directions right now, but on the Nas track "Virgo," Doug E. Fresh reminded everybody exactly why beatboxing exists and what it's for. He definitely remains the king in my mind, both on and off the stage. Definitely king. 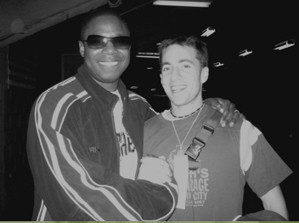 Rahzel is huge, and no beatboxer can come close to doing what he does. I've always loved Kenny Muhammad. Afra from Japan and I used to do tons of shows together about 3 years ago, and we did a few more last year when I was living in Japan, so he and I have learned a lot from each other. And I've never vibed and connected with another musician the way I do with Taylor McFerrin. That kid is nuts. But my beatboxing is influenced by other music just as much as it is by other beatboxers or hip-hop. Basically I just chew up all kinds of people and spit out my Soylent Green.

Yes. Tons of them.