"Yo this is your boy, Scratch, the invisible 1’s & 2’s, and you’re checkin out Humanbeatbox.com! Where all the beatbox be poppin, and spittin all over the microphone and rockin crazy beats, so let’s do this thing… LET’S GO!"

Listen to the whole interview

Do you want to introduce yourself?

Yo this is your boy, Scratch, the invisible 1’s & 2’s, and you’re checkin out HUMANBEATBOX.COM! Where all the beatbox be poppin, and spittin all over the microphone and rockin crazy beats, so let’s do this thing… LET’S GO!

How did you get into beatboxing? Is it something you did when you were a kid that came naturally?

Yeah, it was something that came naturally when I was a kid, you know, just listening to music and doing the songs around the house. Not having the capabilities to record the songs, so I’d just do it around the house and think nothing of it.

So you were playing any instruments before starting beatboxing?

At school I played trumpet, trombone and drums. It helped me get out of class!

How many years of beatboxing does that go back?

So you have been working on a new album which features Kanye West and Redman. Who else features on the album?

I have PD Crack from State Property, Musiq Soul Child, Mike Jones, the whole Boot Camp, an artist from Germany named Xavier Nadou, a reggae artist named Gentleman, ElephantMan and a couple others. I want to keep the album short without too much on it, as 22 songs is way too much, I don’t wanna bore people! I want to keep them locked and in tune with what I’m doing. Is the album going to be mostly layered vocals, or have you gone down the multi-instrument route?

A little bit of both. Some stuff involves instruments, and some is straight vocals. The Kanye West track is all vocals. The stuff I did with Musiq is a mixture of me beatboxing along with my keyboard player. It sounds funny, but when you hear it the sound is so big, and it fits right in with anything else being played on the radio.

So are you recording in your own studio or have you been travelling around to visit the guests?

It’s a mixture really, if they couldn’t reach me I went to see them, no matter what it takes the record needs to be done. It really depends on certain criteria regarding the direction of the record whether or not a track will make the record. There are some tracks that I pulled, for example one I did with Supernatural, Planet Asia and Ice Raw all on one song. The song was hot, but it doesn’t fit the vibe of the record at this point.

So your show involves the use of the Boss Loop Station, as well as a Digital Delay pedal. Do you think Live Looping is the future of onstage beatboxing?

I never looked at it like that, I just was like ‘yeah that’s pretty cool, I should use it!’. It’s like I could start a whole revolution regarding how you play. If anything, I just wanted a patent on it, to say ‘you saw it here first!’, doing something different that others aren’t doing yet, it’s a different approach.

Do you think the old format of one guy up on stage with just a mic and no effects will die out?

It all depends on how you approach the stage. I’ve done shows on my run that were like top-40 billboard dance clubs! I’d switch up the stuff I’d perform just to accommodate to them, like I’d rock a little reggaeton, reggae and Top 40 songs, but it gets to a point where they start thinking I’m a DJ! It’s really just trying to hold on to the crowd, and it’s a challenge because it’s a different approach, a different type of setup. 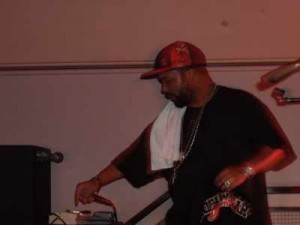 How have you been finding Europe? Any standout shows?

Yeah, quite a few! Stockholm was wild. I did it before with the Roots about five years ago, and the we had the same turnout for this solo show as for the Roots! It was packed from the stage to the door. The venue was inside a hotel, which was pretty cool cos they had a stage there, a bar, and the lobby turned into this whole other world! It was packed in there, people loved the show. Right after I finished performing I went upstairs to get my T-shirt and change, and as soon as I got downstairs most of the crowd had rolled out! They only came to see the show! But it was great, it was cool, the best people to deal with.

Before the show: Courvoiser or Evian?

Evian man! I don’t drink or anything until afterwards, if I do decide to drink. It’s not about going on stage and slurring your words and having some crazy attitude!

Any up and coming beatboxers you want to shout out or show love to?

Well there were three guys that really impressed me while I was at the Beatbox Battle Championship in Germany. It has to be Tom Thumb, Roxorloops, and the other dude who partnered with Tom Thumb.

Joel Turner? He won it didn’t he?

They won some stuff together.. The whole beatbox group thing was fu**ing exciting to watch! That was incredible watching them do it, specially Roxorloops and his boy, they had the Beatoxic thing, with the girl singing… I was looking forward to that more than the other people! Like Tom Thumb and his boy, their stuff was cool, but Beatboxic really had their stuff together, from the attire that they wore to the way they did their performance, they really had their gimmick going on. It was impressive because I could see the amount of time they took to do that. Big shout to Kanye West for helping me with my project, shout out to Consequence, Musiq Soul Child, Xavier Nadou, the whole Boot Camp, if I missed anyone I apologise greatly. These are the people who helped me make my record into something really beautiful. It’s got good solid foundation and it’s very strong, and I like the impact it has when people listen to it. Once they see the way it’s performed, its going to be mind blowing. I enjoy just thinking about the way it sounds, and they way it’s going to come at people. It’s going to be one of the hottest records if not the hottest record of the year, I guarantee it.