An Introduction to SBN

What is Standard Beatbox Notation?

SBN has been carefully designed to be usable by an international audience, combining typography and phonetics to use the shapes of the letters as pictures of their sounds. In SBN, the order of the letters is used to describe the rhythm. The English alphabet has been chosen because the shapes of the letters correspond to their class of sound. For example, the sounds b, d and p all look similar and sound similar. It is also possible, but not easy, to notate "the beat and the chorus at the same time."

What are the limitations of SBN?

SBN will not allow you to write every beatbox sound or routine in the world. It is intended as a simple aid to learning, remembering and discussing beatbox sounds and beat patterns. SBN can not be used to write a melody or a bass line. To do this, you will need to use classical music notation or an mp3 recording.

The sheet is split into two sets of four bars or measures (most popular music is built in chunks of 4/8/16/32 bar or measure chunks).

How to read and write SBN

Single sounds are represented as one or more lowercase or uppercase letters of the English alphabet. Here are examples of single sounds expressed using SBN:

Plosives that exist in language, such as { k }, { b }, { t } and { p } are all typically unforced and are notated using lowercase letters of the English alphabet.

It is possible to force plosive sounds (see Forced and Unforced Sounds) and these are notated using uppercase letters of the English alphabet.

You can think of a beat pattern as a long sequence of beatboxing sounds.

In SBN, a beat pattern is enclosed in curly brackets and each sound is separated with a single space. Here is an example of a simple beat pattern expressed in SBN:

Two separate beat patterns would be represented like this:

In musical terminology, a sound is the equivalent to a breve, minim, crotchet, quaver or semiquaver.

The sounds in a beat pattern can be divided into sections and separated by a forward slash / symbol. When this is done, each section becomes a beat. Sections and beats also make the pattern easier to learn.

Typically in human beatboxing, a beat pattern will have four beats. This means you can count along with the music "1, 2, 3, 4, 1, 2, 3, 4, etc." When this is the case the beat pattern will be divided into four sections, one for each beat. Here is an example of a beat pattern with 8 sounds in a row. Note, although it has only 4 true beats, we call this an 8-beat because it has 8 sounds! I know this is confusing but blame the 1980s drum machine manufacturers!

Here is an example of a four beat pattern with four sounds:

Here's an example of a four beat pattern with eight sounds (called an 8-beat):

Here is an example of a beat pattern with 16 sounds in a row. It's called a 16-Beat. Again, the SBN is divided into four sections - one for each beat. So it really has only four true beats but is 'called' a 16-beat.

In a beat pattern, sometimes no sound is made and this rest may be shown using a minus sign { - } or an underscore { _ }.

Here is an example of a beat pattern with a mixture of sounds and rests:

A duplet is a sequence of two sounds that span a single beat (sound or rest) in a beat pattern.

A triplet is a sequence of three sounds that span a single beat (sound or rest) in a beat pattern.

Duplets or triplets are represented in SBN by using two or three single sounds in a row that are not separated by spaces, for example:

Here is an 8-beat using triplets:

Sounds that are made outwards without breathing are called ejectives.

Sounds that are made breathing out are called aspirated sounds.

In SBN, aspiration is shown by adding { h } to the end of a sound.

In SBN, more complex sounds are made by combining plosive (punchy sounds like { P } and { B } with fricative (continuous sounds like { f } and { s }.

Combination sounds can also be aspirated - i.e. made breathing out.

A carot { ^ } is used to show that a sound should be made either by sucking inwards or by breathing inwards, not the usual outward breath. The carot is placed at the beginning of a sound. An unaspirated inward sound is called an injective.

Here are some examples of some injectives:

Inward sounds can also be aspirated - i.e. made breathing inwards. In the same way as outward aspirated sounds, a { h } is added to the end of the sound.

Inward and aspirated oscillations are notated as previously described.

Sometimes words or even whole lines of words are sung at the same time as the beatbox rhythm. This sounds like magic but the secret is easily learnt if you see the routine in SBN. The sung words are notated in speech marks to distinguish them from the beatbox sounds.

It is important that spaces are only used to separate sounds and beat markers. Here is Rhazel's "If your mother" notated using SBN: 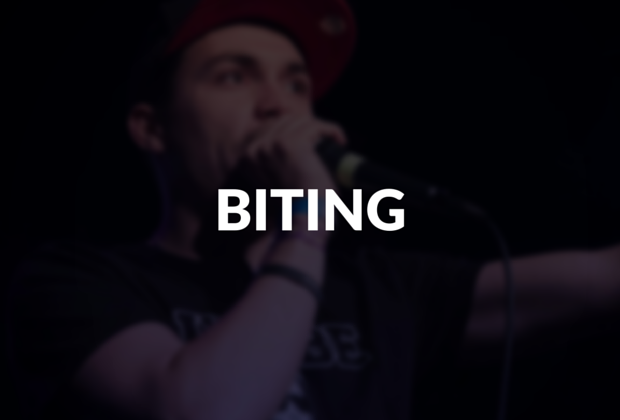