Home›Articles›Part 1 : An Introduction to beatboxing

Part 1 : An Introduction to beatboxing

by Karen Lederer
[READ INTRODUCTION: THE PHONETICS OF BEATBOXING]

The Acoustic and Auditory Phonetics of Human Beatboxing

Part 1 : An Introduction to beatboxing

In the first part of this series of articles on the Phonetics of Beatboxing, Karen Lederer introduces us to beatboxing and its relevance to phonetics and Stowell's 'Beatbox Alphabet'.

Human beatboxing is a fascinating vocal art form which involves the rapid and precise manipulation of the vocal organs to emulate the beats and rhythms of a drum machine.

This study, published as a series of articles, aims to assess the accuracy with which the sounds of beatboxing imitate the sounds of percussion instruments and to investigate how beatboxing is produced and perceived in its wider sense and in relation to the perception of speech.

1.1 What is human Beatboxing?

In order to understand human beatboxing, the beatbox itself must be understood. Beatboxes, or drum machines, create beats and rhythms electronically and were originally intended as percussive accompaniments to home organists, eliminating the need for a real drummer and drum kit. Early drum machines used loops of 1/4 inch tapes of recorded drum sounds that organists could play repeatedly as percussion to their music, and advances in the field soon enabled the tempo of these preset rhythms to be altered using a sliding switch.

The term beatbox came about in reference to these box-shaped and non-programmable drum machines, but was later applied more specifically to Rhythm Composers by Roland. Roland released the first programmable drum machine in 1975, enabling musicians to compose their own beats and rhythms. This resulted in a growth of popularity in drum machines and they became used in a number of different musical genres. 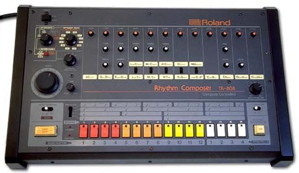 In 1982 the Roland TR808 Rhythm Composer was launched. It was an analogue machine, producing sounds much like a synthesiser and in comparison to other, digital drum machines released around the same time, the TR808 created unrealistic drum sounds that at first rendered it unpopular. It was, however, these unique, other worldly and futuristic sounds that were responsible for its later revival among musicians keen to experiment in new genres of music.

The TR 808 became heavily influential and widely used in the fields of hip hop, rap, rhythm and blues, dance and electronica. It was also to become an important influence in the vocal art of human beatboxing.

Although hugely influential in 1980s music, drum machines, or 'beatboxes' were not cheap. Few musicians could afford their own beatbox, and it is largely this inaccessibility that lead to the development of human beatboxing. 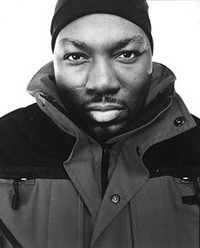 A much cheaper instrument, capable of creating such a vast range of sounds and more, is the human vocal tract. For those who could not afford a beatbox, this became the alternative. Groups of people usually in urban communities learnt to recreate the sounds of the beatbox with their mouths, hence the term 'Human Beatbox'.

Rahzel, a world renowned beatboxer and the self-named 'Godfather of Noyze', began from these roots at the age of ten. He began by emulating the drum machine with beats but later learned to add other percussion noises, melodies and lyrics. (Research interview with Rahzel Brown, 11/10/2004). While human beatboxing seems the obvious answer for anyone without a drum machine, it takes years of practice in refining noises and perfecting beats to be able to provide convincing, realistic beats and rhythms.

Since the initial imitation of the drum machine, beatboxing has developed into a much more complicated mimicry and beatboxers now create anything from a basic beat to an entire song. Perhaps one of the most impressive acts to watch live is when a single person integrates vocally created beats and rhythms together with melodies, lyrics and imitations of tonal instruments to recreate well known songs as in Rahzel's 'If Your Mother Only Knew' (2000).

Beatboxing is not only restricted to this kind of music. It can be applied to almost any genre, as long as percussion is present.

1.2 Aims and structure of the study

As an interpolation of onomatopoeic sounds and vocal effects, beatboxing requires an extensive grammar of speech and non-speech sounds to imitate the sounds of a drum machine. Various airstream mechanisms and a range of articulatory methods are employed to create these imitations and this study aims to assess how accurately these methods allow the beatboxer to reproduce drum machine sounds. The wider sense of beatboxing is also considered including its integration with singing and the overall perception of beatboxing by the listener.

Part 1 of this series introduces beatboxing, its relevance to phonetics and Stowell's 'Beatbox Alphabet'. Part 2 outlines some general theories on the perception of speech and how speech and non-speech sounds are processed in the brain in preparation for Part 3, which applies these theories to the perception of beatboxing and its differentiation from speech in the brain.

Part 6 is an acoustic comparison of beatboxed and machine-made sounds. Each sound studied will be dealt with in a separate subsection and the results of each brought together in a conclusion at the end of Part 6. Part 7 will make final conclusions in light of earlier findings and discussion while Part 8 will outline the limitations and provide suggestions for further research in the phonetics of beatboxing. References and acknowledgements appear in the Abstract and Acknowledgements and References sections.

1.3 How is Phonetics relevant to beatboxing?

The study of phonetics is concerned with how sounds are created in the vocal tract and aims to describe the articulatory processes and perceived sounds of speech.

Beatboxing adopts several sounds that do not occur in the world's languages and is an entirely new area for phoneticians to study. Like speech, it is a skill that requires fast and accurate manipulation of the vocal tract to produce precise sounds in a strictly timed environment and while many beatboxing sounds can be and are described by beatboxers as modifications of familiar speech sounds, they are sufficiently different not to be perceived by the listener as such. Other beatboxing sounds require extraordinary vocal acrobatics to produce noises not usually associated with the human vocal tract. Phonetics can investigate both speech-like and non-speech-like sounds of beatboxing in relation to other sounds created in the mouth.

The integration of these sounds into a musical beat then adds a whole new element to their phonetic creation and the addition of melodies, words and imitations of wind, string or electronic instruments to the beats requires vocals and tone as well as -or on top of- the basic beat. The phonetics of beatboxing looks at the mechanics of this complex production of sound, and how it is perceived by the listener.

In linguistic phonetics, phonetic symbols are used to represent types of phoneme. For example an aspirated /p_/ is a type of phoneme that can be reproduced by anyone and still interpreted in the same way. In experimental phonetics and in this study, we will not be concerned with types, but with tokens. A token is also represented by phonetic symbols but it refers to a unique pronunciation of a particular sound by a particular person at a particular time.

The descriptions of sounds given in this study are not definitive. They involve an auditory analysis as well as an instrumental analysis and are partially subjective to what the analyst hears. They do not necessarily represent exactly what is going on in the mouth, but what the analyst perceives to be going on from the auditory and instrumental analyses combined. Articulatory descriptions of sounds given by the beatboxers who make them are also taken as a guide to help determine the movements of the vocal tract, but beatboxers are not phonetically trained and their descriptions may vary slightly from the actual actions of the articulatory organs.

Very little has been written on the phonetics of beatboxing. There are several Web sites dedicated to the beatbox community and several instructional sites which aim to teach the art, but few that explain the articulatory process and auditory perception of beatboxing from a phonetician's point of view.

Dan Stowell is a beatboxer who also has an interest in phonetics and he has compiled 'The Beatbox Alphabet'. This 'alphabet' uses the IPA (International Phonetic Alphabet) to try to describe the sounds made in beatboxing and establishes where and how sounds are articulated. It is useful to beatboxers and phoneticians alike in describing how each sound is made and is a comprehensive way to write beatboxing down. However, to make the alphabet readable and accessible, certain sacrifices of specific detail have been made. The beatbox alphabet uses the IPA to describe the sounds of beatboxing, however the symbols in the IPA relate to sounds that are spoken, not beatboxed. As we shall see in Parts 2 and 4, the sounds of beatboxing are necessarily very different to those of speech although they are often produced by actions in the mouth that are ultimately the same.

By using symbols from the IPA, the beatbox alphabet fails to acknowledge the differences between spoken and beatboxed sounds; the [ts] of the 'simple closed hi-hat' is not distinguished from the [ts] at the end of a word such as cats: /kats/. If the differences between speech and beatboxing sounds were to be acknowledged, a huge number of diacritics and voice quality symbols would be needed. This would render Stowell's alphabet difficult to read and write and would prove problematic in deciding how much detail to go into when giving transcriptions. Too much detail would mean sounds were transcribed as tokens rather than types and this would not be appropriate for the beatbox alphabet.

The beatbox alphabet works on the assumption that all sounds within it are beatboxed, not spoken and this is why Stowell is able to exclude diacritics. The avoidance of diacritics allows for some flexibility in the way the alphabet can be interpreted. It acts as a guide as to how sounds can be made but leaves enough flexibility for beatboxers to add their own unique style.

'The Beatbox Alphabet' is the first serious attempt to write beatboxing down. It requires knowledge of the IPA and some study before it can be understood, but once familiar to the reader, it allows transcripts of beatboxing to be read fluently and with sufficient accuracy to recreate each sound. The problem that still remains for beatboxers is how to write down the beat.

Despite the lack of literature on this subject, there have been studies in phonetics, acoustics and psychology that are extremely relevant and can be applied to beatboxing to help explain the ways in which it is perceived and produced.

Notes : The precise way in which a beatboxer makes a sound varies from person to person and according to the previous and following beats that are made; there are other ways to make the beatboxed sounds aside from the ways described in this study.

[READ PART 2: HOW THE BRAIN PERCEIVES AND PROCESSES VOCAL SOUNDS]

Introduction (The Phonetics of Beatboxing)