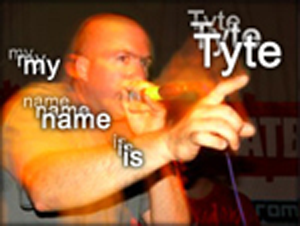 One UK legend interviewing another? Madness!

An interview with the oldest of old-skool beatboxing pastors

In case anybody doesn't know, can you introduce yourself and what you do?My name is TyTe, and I own and run Humanbeatbox.com (Although technically HBB is a community and so it's lead by everyone! - Ed.)

Everybody knows that you are truely Old Skool - What got you into it back in 1978? Was it your own discovery, or were there other influences?

Beatboxing was definitely my own discovery (as in I discovered making sounds myself - Ed.), but I didn’t know it was called beatboxing at the time. When I was about 8 years old my dad had a reel-to-reel tape machine. At the time cassette recorders were just coming out, so I was the only kid on the block who had one. The great thing was that it came with a microphone. As a kid I would always be making strange and wonderful noises (I still have this machine!! - Ed.), so as soon as I got this microphone I started doing impersonations, messing around with recording and making drum sounds. I still have a reel-to-reel recording of me making drum sounds back in 1978!

What led you to start making your famous tutorials, and where do you see them going in the future?Back in 2002, A-Plus started BEATBOXING.CO.UK and straight away we could see the potential for networking beatboxers all over the world. There was nothing out there to teach people how to make the sounds, beats or grooves. So I produced the very first audio and text tutorials, with little MP3 files so you could listen to the sounds. Later on we developed those into video tutorials. In the future, hopefully we’ll do more tutorials as beatboxing has moved forward, even since those first tutorials, with new sounds, new rhythms and new ways of doing things. I’m still learning stuff every day!

Some people are saying the future of beatboxing lies in looping and layering. What's your view on this?

I think it does lie in looping and layering, but I think the future of beatboxing will be multi-stranded – I don’t think there’ll be one path that beatboxing will go down. There will still be the solo artists, comedy artists, multivocalists, beatboxers with bands, traditional hip hop artists, solo projects, live looping and studio beatboxers producing vocal music using their mouth to do all the sounds. I don’t think the future will lie in just one style of beatboxing. It will spread right out and become part of lots of different styles of music.

Are you performing much?

I’m doing quite a lot. I’m in full time employment (as a church pastor) so it means that beatboxing gigs have to come second to that, but I’m still doing gigs! Yesterday I did a workshop in a school, with some kids - who were pretty hard going - but just loved it. Last night I did a performance in a pub which went down well, so yeah I’m still doing a lot of performances.

As the world's first beatboxing pastor, how do you manage to juggle your religious responsibilities with running the site?

I’m both a pastor and a beatboxer, and I don’t see the two as being separate. That’s who I am, that’s who I’m called by God to be. As a pastor, I see my job as to bless the world and being part of Jesus’ mission to bless those in our community, those that need help. That’s God’s mission, and that’s why Jesus came, to invite us to join his mission. So if you like, I extend that into the beatboxing community, I’m a beatboxer, I love doing it and always have been. My ethos is to bless that community, hence doing free tutorials, giving to the community my time, money and talent, because I love the world and I want to bless it. So in a way, I don’t see the two as being separate, I see them as being merged.

Do you have any plans for future projects you want to tell us about?

On the ground level I’m excited about beatboxing in youth culture, and doing church in new ways. I do a lot of work with young people, and on the church side of things, they believe in God, they’re down with the idea of Jesus, but to them church is boring and irrelevant. So I’m excited about doing ‘Beatbox Church’ - church with beatboxers, and worshiping God through beatbox, getting together and having gatherings, and that’s a really cool thing.

On the 'products' side I’m excited about producing more video tutorials. I’ve got lots of ideas about producing them in a slightly different way, going right back to building up sounds. The more I’ve done beatboxing I’ve realized there’s no such thing as a default sound set. There are an almost infinite number of sounds and combinations that you can produce with your mouth. On the next product I’d like to go right back and say here are the absolute basic phonetic sounds that you can make, learn these, this is how you combine them to build up individual sounds that you can then use in beats and patterns. It’s kind of a different way of looking at it, from a more particle level, rather than from a top down approach. (Check out this month's article on Standard Beatbox Notation! - Ed. - updated 2014 - Ed2!)

I’m here to just give to the human beatboxing community. My passion is to see other people learn how to beatbox. I love it! There’s nothing better than getting up in front of a group of young people who’ve never heard it before, and seeing their faces light up, saying “Wow! That is so cool! How can I learn how to do that?” To be able to educate them, and get them involved, being able to express yourself creatively. It’s great because with beatboxing you don’t need to go out and buy loads of equipment, amplifiers, guitars or decks. You can do it with your mouth, you can do it with your mates. It’s just a fantastic art form! So if I was going to make a shout out, I guess it would be to all the up-and-coming beatboxers, all the newbies out there, all the people who are just starting out, keep going with it and have a great time!