by Brendon Albertson (aka Green Beatbox)

During my study of the Chinese language and my teaching of the English one, I've found one of the biggest problems with Chinese students' accuracy in English to be a result of negative interference (when one language's rules get in the way of acquiring another language's).  This is especially true for English verb tenses (it's very often that Chinese students ignore tense altogether, despite being otherwise very advanced in their English, as Chinese has no explicit morphological tense marking).  However, interference is also a big issue for pronunciation.

Chinese phonological rules differ from those in English.  No surprises here.  Perhaps the most important difference, in my opinion, occurs at the end of syllables.  Without exception, all Mandarin Chinese syllables (characters) can have only 3 possibles codas (endings): n, ng, or nothing at all.  Here are some examples of syllables (which are also whole words) in Mandarin Chinese:

As you can see, they all either end in n, ng, or a vowel sound.  Now, let's look at some English words:

These words end in the consonant sounds k, v, ʃ, rk, st, dʒ, ts, s, bz, lz, and ks, respectively.  Chinese learners therefore often have a hard time pronouncing the ends of English syllables and words because their native language does not allow for these sounds at the end of syllables.  Think about other English words that end in consonants other than n and ng.  There are tons!  (Tons ends in nz)

Now that we've identified the problem, how do these learners cope with such crazy sounds at the ends of words when compared to their native language?  Well, I've often heard my beginner-level Chinese students leave off the coda of syllables at the end of words altogether.  They say things that sound like:

Notice that the words ending in n (Dunkin, she, in, Boston, to) are generally pronounced just fine (these words are also rather short and don't have consonant blends -- another problem for another day).  Thus, Chinese learners have trouble with those words in English that end with consonants other than what Chinese syllables end with (work, at, Donuts, lives, and, likes, cook).

Beatboxing out those codas

Now, how can we get Chinese learners to recognize the importance of these final consonants in English words?  We could present some good-old-fashioned minimal pairs, showing them the danger of mispronunciation with sentences like I went to help versus I went to hell.  Sure, this can show them how important these codas (final consonants) are, but what about actually getting them to say them correctly on the fly in a fast conversation?  That, I'm afraid, takes repetition, drills, and more behaviorist approaches.  We could drill words that end in these consonants for days, gradually making our way up to sentences and focusing on accuracy at the end of words.  Or we could do something much more likely to trigger muscle memory.  Something a little quirky and humorous (since humor and uniqueness generally leave better impressions on the memory).  We could try beatboxing.

What is beatboxing? Most people have at least heard of this art form, but if you haven't then check the Wikipedia article.  No, it's not acapella.  And it's not scat.  It's something that's evolved since the early 1980's into something really cool (search for the 4th Annual World Beatbox Championships on Youtube to get a feel for what beatboxing has become in recent years.) 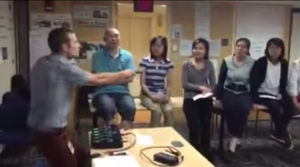 Beatboxing presents a unique advantage to our problem of those pesky consonants at the end of English syllables because it involves just that: lots of consonant sounds used to emulate drum sounds.  When beatboxers make beats with their mouths, they are essentially saying lots of consonant sounds more powerfully, more aspirated, or just more funky than one would typically when speaking.  Ask an example, the "kick drum" sound in beatboxing is usually performed by saying a /b/ sound, although with much greater pressure built up behind the lips before releasing the plosive.  It might be called a "extra strong unaspirated plosive" or something like that.  A famous beatboxer named Tyte has in fact created system of standard beatbox notation, in which the kick drum sounds is written as {B}, and another academic paper has been written that attempted to write basic beatbox sounds viewed through an MRI scanner using IPA symbols, though a large number of sounds used by professional beatboxers today are so complex as to not correspond to any IPA symbols.  Despite the popularity of these more advanced sounds in modern beatboxing, it is the simple sounds that we shall focus on for the purposes of teaching pronunciation in the ESL field.

First, let's take a look at a few of those pesky English words mentioned before.  That's right, the ones that end in consonants other than n and ng:

What do all these final consonant sounds have in common?  That's right, they're all common sounds used in beatboxing!  Beatboxing can be a fun way to have learners practice these sounds before putting them into words.  For example, try saying the following in a rhythmic sort of way:

That last one is perhaps the most important because the /ts/ is a consonant blend.  My Chinese students often have trouble saying the /t/ and the /s/ as one unit.  They might say something that sounds like "shir - tuh - suh" rather than "shir - ts" when you force them to say the final consonant blend.  Beatboxing is especially good for these blended sounds, as it often relies on saying them as "one unit" for full effect.  Look at the chart below that describes beatboxing sounds linguistically, and try to find the sounds that are similar to consonant blends in English 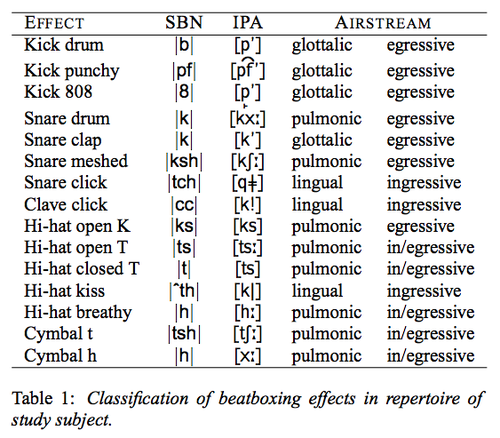 Another chart that shows even more sounds is here.  Anyway, the chart above shows that the "kick punchy," "Hi-hat open K" and "Hi-hat open T" sounds are basically just the English consonant blends /pf/, /ks/, and /ts/, respectively.  These are just a few examples, and because beatboxing is an art form and not a science, it's up to the individual beatboxer as to how to make certain sounds.  As a beatboxer myself, I might add "ps" to this list as an alternate hi-hat sound, for example.  As a teacher, you are the beatboxer, so it's up to you to find the sounds you'd need to teach the English consonants your students have trouble with. 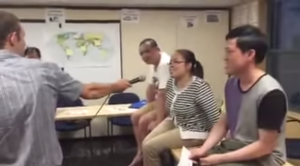 And no, you won't have to rely on exotic African click sounds, because pretty much any sound in any language can be made into a beatbox sound to emulate a drum.  If English is the language you're teaching, you might use /v/ as a synth sound, or /sh/ as a sort of snare sweep sound.  The point is to find sounds that you need to get learners to say, and then try to "pull them off" as beatbox sounds, not the other way around (you wouldn't teach African click sounds if your students are learners of English!).

In any case, the point of using beatboxing in teaching ESL is not that beatboxing should be taught seriously, or that learners should be expected to beatbox while they speak English.  It's a way to raise phonological awareness, a way to have learners really focus on what's happening inside their mouths when they speak, and a way to add fun to the classroom. 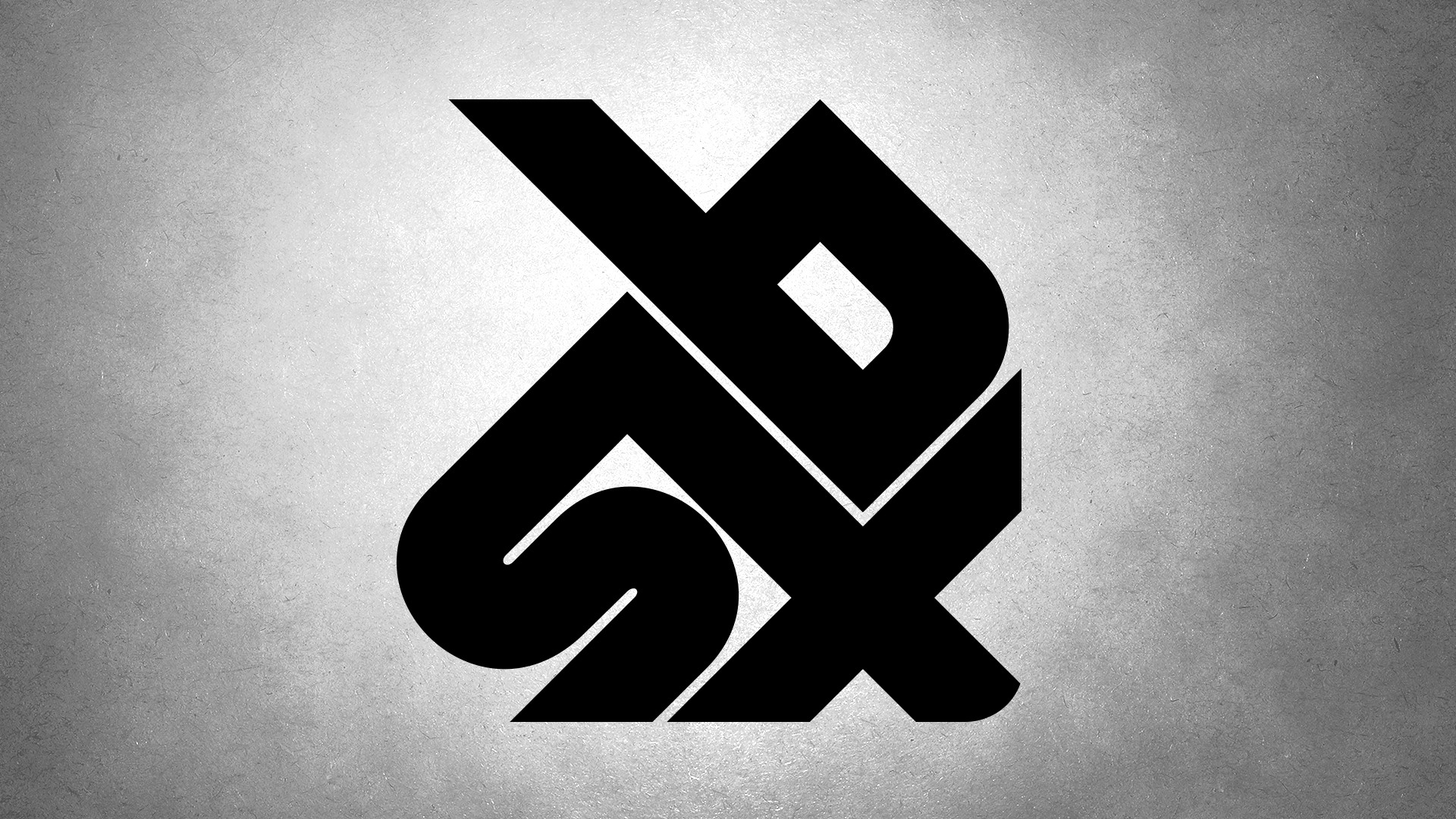