All in the mind 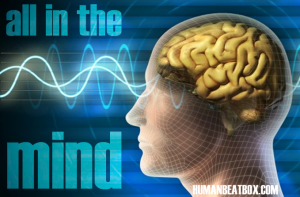 TyTe messes with your head in this article that explores the psychoacoustics of beatboxing.

1. Let's start by messing with your head

You do not need alcohol or drugs to have a mind-bending experience. Listen to this audio clip on headphones. The clip has an alternating high and low note. If you have the ability to put it on a loop then do so.

You should hear the low note in one ear and the high note in the other right? Nothing unusual about that? Now, swap your headphones round the other way and listen again. What do you hear?

It sounds the same - the low note is still in the same ear. That can't be, right? What you are experiencing is your brain (psych) interpreting the audio (acoustic) that comes to your ears - hence it is a psychoacoustic phenomenon or auditory illusion

If you think about it, string quartets or even rock bands often arrange themselves with the bass on the left hand side?

Now you know why.

Now that I have proved to you that auditory illusions exist, you can see that there are many incredible examples out there - as well as a few that are just plain freaky! (see links below). However, there is one type of illusion that we are going to focus on. This is called a Grouping Illusion.

Although only 'discovered' fairly recently, a note grouping illusion was used by the classical composer J.S. Bach to give the impression that more than one part was playing even though only one instrument was being played. (for an example, listen to Preludio from Partita number III in E major for solo violin by J.S. Bach). The instrument quickly alternates between a high note then a low note then another high note then a low note and so on and the listener hears two distinct parts playing - a high melody and a low melody.

The same thing can be done with different timbres (sounds). If we play a drum pattern between just two sounds, our ears can differentiate between the two parts - for example, we hear a kick drum part and a snare drum part.

3. Okay, so what does this mean for a beatboxer?

Right, we're getting there. The human mouth can (usually) make one sound at a time. However, through using (i) auditory illusions and the fact that (ii) loud sounds mask quiet sounds, we can trick the brain into thinking that more than one sound is being performed at the same time.

For example, we could make it sound like we are singing and beatboxing at the same time or that one sound is playing when it is not.

To make this work you have to follow the rules, otherwise it just won't have the impact you want it to have.

Let's explain this with a simple example. In this example, we start with the hi-hat and this is our continuous sound:

The hi-hat is quieter than our other sounds.

Then we add a snare drum:

Then a kick drum:

Now, only one sound is being made at a time, however the listener hears both:

at the same time. The mind fills in the gaps. Amazing!

Explore this stuff some more...

Psychoacoustics and auditory illusions are fascinating. Wikipedia have some good examples worth listening to. Check out these links and books to find out more: