A Look at Michael Winslow, the "Police Academy" Star

Do something for me: dig deep into your childhood memories about the movie Police Academy. Invariably, especially if you are a beatboxer, images of Michael Winslow the sound effect master pop up. You may not know his name but you definitely remember his ominous sounds. So incredible, precise, and otherworldly. Interesting since they are near-exact replications of sounds from Earth - like babies crying, car gears grinding, and computers chirping.

Well, I have got some good news for Planet Earth. He’s back. You may be wondering: "That’s right. He wasn’t around for a while." And he is as cutting edge as he was then as he is now. A little about his comedy show is in order before you check out the in-depth interview that I had the good fortune, and pleasure, conducting.

He went beyond spittle. He actually spit on us. Well, kind of.

We showed up to Giggles, a comedy club in Seattle, early and the line was already out the door. Dozens of people in their late twenties and early thirties prepared to be wowed by the talents of Michael Winslow. As soon as the doors swung open, my friends and I grabbed seats, ones close enough to catch any spittle from his performing lips. 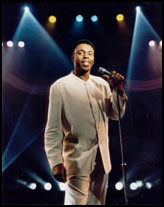 Here’s how it happened. Michael rummaged through a pile of props. He topped his head with a beret, threw on sunglasses, and seized a bottle of wine. As soon as he grabbed a violin bow, hip hop music kicked in loudly over the club’s speakers, and he morphed into a caricature of a French rap artíst (notice the accent). In-between his gruff and accentuated rap, he bowed his arm and issued from his lips a simulation of a violin. Incredible. At one point, he uncorked his cheap bottle of wine, spoke the words "French Kiss", and stuck his tongue into the mouth of the bottle. Seconds later with debonair, he poured contaminated wine into my friend’s pint of beer. Much of the surrounding crowd voiced my response in unison: "Yuck!".

My stomach was in knots from uncontrollable laughing.

His sheer comedic sense had me in stitches even without the sounds. Among his many talents, this man is a solid comedian. And I feel like I should know. I spent years in my dad’s comedy club, which was on the improv circuit, being entertained by professional comics.

But his sounds are truly amazing. Michael stupefies crowds by recreating the subtleties of otherwise mundane sounds: slamming doors, skidding cars, and creaking beds. Early in his show, he simulated the sounds of the ocean - and women pissing in their pants - as a way to pick on the gang of seventeen women celebrating a bachelorette party. Hysterical. He sent many of them to the restroom as he chirped seagull calls atop the sounds of the lapping ocean. Later he performed a series of comedic skits about getting into trouble because of his sound effects. In one vignette about junior high, he simulated a rolling snare drum when his teacher barked at him to march to her desk. As she scolded him for his mischievous conduct and wrote him a pink slip to the office, he produced the hollow sounds of her pencil scribbling across the top of the desk.

Michael is a solid impersonator.

In addition to a world of sounds, Michael is a solid impersonator. More than a few drunkards beckoned him to do "Ozzy". Resisting, he launched into his famous routine of Jimmy Page slamming his hand in a door - an accident, he claims, that gave birth to heavy metal music. As Winslow belted out Page’s signature scream, I almost forgot that it was an impersonation.

One thing that I didn’t forget was his use of effects pedals throughout the show. Beatboxers have a tendency to be squeamish about effects. At first, I was a bit disappointed with his constant use of what I imagine to be effects like reverb, chorus, and flanger. Shortly into the show, however, I fully recognized that he in no way hides behind these effects. Instead, he uses them to enhance his already precise repertoire - and explore territory impossible to access without their use. When he launched into Jimmy Hendrix’s guitar solo of "Star Spangled Banner", I got how fully he moves around within the effect’s landscape. Amidst the effects of distortion, he had such incredible variability in his guitar sound’s pitch, timbre, and tone.

Let us just say that I am now an advocate of effects - when the performer isn’t hiding behind them, that is. Besides as my friend and professional beatboxer Infinite from the Felonious crew explains, Rahzel and all of the beatbox performers have the mic set up exactly how they want it.

And I hope this extensive interview with Michael sets you up. One disclaimer is in line though. We don’t go into the content of his act. In other words, I didn’t ask him to teach the audience how to produce sounds. Instead, what began as an interview transforms into dialogue about his life, the creative process, and principles on how to stay true to oneself as an artist in a world that tends to be market driven. Deep doo-doo, I assure you. Enjoy.