Rahzel, the Godfather of Noize, has a chat with Hooper and Nevo D.

Nevo D and Hooper catch up backstage with Rahzel at the Barfly in Liverpool, UK.

Rahzel is one of the greatest beatboxers of all time. Not only are his skills undeniable but he's also a great entertainer. His recording of a version of Aliyah's 'If Your Girl Only Knew' became one of the all-time human beatbox classics and he has consistently pushed the boundaries of human beatboxing. Nevo D and Hooper caught up with him on tour in England.

How did you ever get into beatboxing?

Oh man, so many different things, but first of all I've got to give ultimate props to the Fat Boys, the first beatbox I ever heard. They were on a random tape I came across that someone let me hear, and once I heard them, that was it.

What was the beatboxing scene like back in the 1980s?

It was pretty much like it is now - you've got the values, the people, the competitions and stuff like that. Back in the days, people had to go up through those ranks and battle someone, bust tunes, get some respect or notoriety. Back then you had to travel. It was a serious game. New York, Philly, DC, Florida - it was crazy. And that was without the Internet - it was all word of mouth. A friend or cousin would call and say "Yo, there's this party going on in Virginia and there's this champ down there. Get on the train and come down." It was all word of mouth, no Internet, no flyers, no promotion, no marketing. it was all word of mouth. It was fun though. 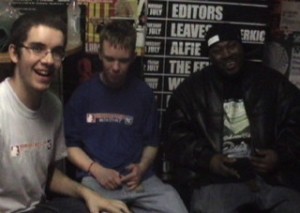 How did the legendary Roots Crew start off?

Well, you know, ?estlove (drummer) and Tariq (rapper) went to school together so they pretty much founded The Roots. Then from there they got legendary producer Scott Storch who plays keys. Then Leonard Hubbard (bass), then Kamal (keys) and the I came - about 1993/1994.

How did you come up with If Your Mother Only Knew?

I've got to give props to Timbaland because before Timbaland came out a friend of mine worked at the record label and used to get all these beats from different producers - beats from the Neptune's, beats from Timbaland, the whole of Virginia - before they became famous. He played me some stuff from Timbaland and I was blown away. I was like, wait a minute! He took the drum and bass that from Europe and flipped it and made it like hip-hop. It was kinda cool. And then I started listening to more of his stuff.

He and Aliyah used to be real tight together and did a lot of work on their albums so I was inspired by his whole production style. So in order to get a record that's familiar to most people we've got to get the whole record - so doing the song with Timbaland beats - that's how I came across it. I heard If Your Girl(friend) Only Knew (about Aliyah). And after that (*Rahzel clicks his fingers*), I just changed the words around to make it fit my personality. So instead of like a girl talking to a guy, the guy's talking to the girl. I kinda flipped it - being an entertainer - If Your Mother. If you're doing a show and you're talking to a lady - "If your mother only knew?!" - you know what I'm saying? (laughs) I flipped it.

Which was your best ever gig and why?

Wow! I could tell you the worst ones! (laughs) But to me, the best ones are when you get love from the audience. It doesn't matter how small. We just did a joint called the Northern Lights in Leeds. There wasn't a whole lot of people but the fact that they were into it made it a good show. I like it when I can go deeper and do some more intricate shit. To me, those are the best crowds. I look back at that show and it was a good show to me. It's the crowd appreciation that makes a good show.

I'm going to continue to try and push the art across boundaries with the beatbox so that more and more people become aware of it and can appreciate it. I don't think people understand all the doors I've kicked down - they have no idea - like some major people will give respect - - - - by people that are probably fans of yours, or fans of other people or people like in the recording industry or outside the industry that respect the art. Because, you know ...

So I'm going to continue knocking down doors and doing some good stuff, continue touring and going all over the world, touching people that have never heard it. That's the most important thing. I'm sure there were some in the audience tonight that don't even like hip-hop, or never heard of the beatbox, or never heard of me, but tonight they would have heard it. To me, that's what it's all about. If one person who never heard me goes "This is great!" then he's going to spread it. I'm a crusader. I do what I do but at the end of the day I'm a crusader. I'm going everywhere with it. Every genre of music - there are no boundaries. Make the world respect the beatbox - that should be your mindframe. Don't worry about what everybody else is doing or what they're saying, it's all about your actions - crossing boundaries. It's like being a scientist, doing shit that nobody else is doing. That's how you go into a new era. You break down boundaries and create new forms. That's what it's all about.

Want to jam with us?

(Rahzel, despite just giving 150% in a show, agrees to jam with Nevo and Hooper)