Heard the term but need more info... Add EQ to your sonic arsenal 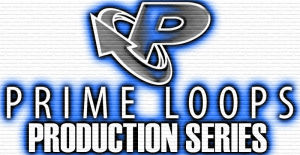 Master the use of EQ in your music

EQ is an extremely important tool in Music Production, yet it can also be overused and can have the ability to damage aspects of your tune, as well as your ears!

EQ is basically a method of amplifying or attenuating certain frequencies, and those surrounding them. To understand EQ you need to understand Frequency. Frequency refers to the number of cycles of a waveform per second. Imagine a Sine Wave. When it has completed one cycle, it will look like this:

The lower frequencies, such as sub bass, have longer waves and therefore complete less cycles. These frequencies travel through solid objects much better than high frequencies, which is why your neighbour will only here the lower frequencies coming through their walls! The Human Ear can hear between 20 and 20 000Hz (20kHz), so 20 Hz will be the deepest rumble and 20kHz the highest hiss you can imagine.

Listen to the Mix

You need to be able to listen to how each frequency will affect you mix. The frequencies around 1-3Khz are those where speech is most audible, but too much and they can hurt the ears. Around 9-15kHz is where the highs come in your mix, the crisp beatbox hi-ats and the Sparkling Vocals. Again too much will sound harsh and tinny. Around 300-500hZ can be the high end of the bass, but can also make your mix sound muddy. Around 80-200Hz are the frequencies the majority of your beatbox bass will occupy, and below 80Hz are the more subby frequencies of your bass, and the punch of your Kick Drum.

To use EQ you first need to really listen to the sound you are about to treat. Try and get a picture of the harmonic content in your head (not on the screen) and really listen to the timbre of the sound. What do you like about it? What don’t you like about it? How will this sound sit with other sounds in this song? Before diving in head first and cranking the low frequencies up on your bass or the high mids on your lead, take it easy and really try and decide what you want out of the sound.

Cutting what you don't want

The best method to start off with is by cutting out any unwanted frequencies. If you think your sound suffers from something which shouldn’t be there, then you will need to cut it out. Maybe it’s too harsh, to boxy or too ringy. Piano’s often contain unwanted resonant frequencies. The best method to isolate them is by giving a frequency about a 10dB gain with a small Q factor, and sweeping through the frequency band until you find the unwanted frequency, and you can then make a cut here. Be careful not to cut too much out, or you’re risk making your sound thin and flat. 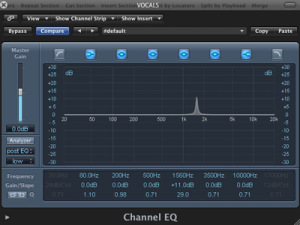 When EQ-ing instruments in your track, you want them each to have their own place in the mix. In other words, their fundamental frequencies (most prominent sounding frequencies) do not want to be interfering with one another. While a guitar may sound great on its own with plenty of harmonic content around 1-3kHz, it may drown out the vocals, so you are going to have to try and scoop out some space so they can sit together in the mix. The same with your Kick Drum and your Bass, if these are occupying the same frequencies, when the song is turned up loud it will sound confused and not precise. Imagine yourself at a club. You will ‘feel’ the kick drum hitting you in the chest for instance, and the bass in the stomach, or perhaps the other way round.

When Mixing, try and EQ as much as you can when the whole track is playing, rather than soloing individual instruments. This means you will not try and make an instrument sound great on its own, but try to blend it accordingly with the other instruments and frequencies in the track.

Below are to EQ’s for two different mono piano sounds. They were playing the same thing, but one was panned left and the other right, then both EQ’ed differently to give a more stereo sound. Notice the lows have been removed to make way for the bass, and one of the pianos which was particularly harsh sounding has cuts around 2Khz, which also helps make room for the vocals. 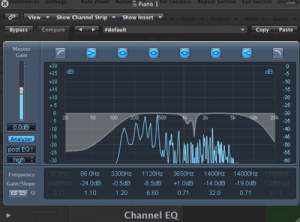 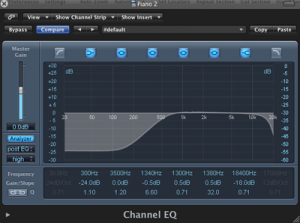 Get into the habit of cutting off low frequencies off an instrument/part if they are not adding anything to the mix. Although it might not sound like you are doing much, it really does help clean up your mix as there is often low frequency rumble present in recordings. 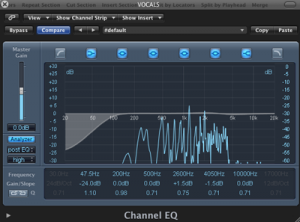 Be careful when EQ-ing a mix as a whole, and beatboxing. Think less is more. Only do what you need to do, don’t just EQ for the sake of it. You can transform your mix with EQ, just be careful not to over do it!

Where are the older beatboxers?