An Interview with OG Beatboxer Kidlucky

I saw Doug E fresh in Beat Street and lost it. Then I saw Buff and just started making music with my mouth.

What got you into the beatboxing world?

Well, I saw Doug E fresh in Beat Street and lost it. Then I saw Buff and just started making music with my mouth.

What have been your musical influences, and which artists do you admire and why?

Well, I love hip-hop of course. I like Afrika Bambatta and Kool Herc, Doug E Fresh, Hank Shocklee. Now I like Free Jazz, I studied that for a while. Some greats are for me are John Coltrain, Miles Davis, Sun Ra, Sabir Mateen Pharoe Sanders and Kali Z. I also love funk like George Clinton and James Brown. I mean vocalists I like are Mike Patton, Ready Rock C - If he knew how great he was he would never even worry about Will Smith because ready is so great he could have had millions now. Michael Winslow, Bobby McFerrin, Diamanda Galas. I mean the list is vast of my influences, oh and even influenced heavily by the UK; Soul II Soul, Massive Attack, Brand New Heavies, Tricky...

Hey man, if your into Massive Attack you should hear some Portishead

I love Portishead! Roads is my favorite. 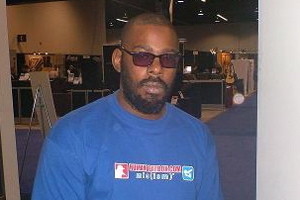 Beatboxer Entertainment (BBE) is one of the first agencies dedicated to promoting beatboxing and beatboxers. What is your vision for the company?

I envision being content providers for event coordinators, and to also produce events as well. I find that just putting the word out there is not enough; we must find a way to put money in beatboxers' pockets and to support each other as well. I think also that we at BBE are serious artists who have done a lot and want to be given equal pay as other kinds of musicians.

Fair enough, I know I would be annoyed if a trumpet player got more money than a really ace beatboxer.

And it happens all to often. we make the crowd scream and then go home with some drinks. Well, I have not in a while, but many still struggle. At BBE we do events and sometimes there is pay sometimes not, but we rarely do a free show for someone else unless its part of our like clique, like the WBBF. I work with all the other human beatbox organizations because we need to look out for one another and help keep the other afloat.

This way we can make a successful movement strong! I like HUMANBEATBOX.COM the way it is now and I like Tyte and what he is doing, he is a very patient man. That is what all organizations need -- a strong leader with values. The only thing is that he is Christian but I won't hold that against him, hahaha, he knows I respect him dearly. We have great debates about religion. He is a very intelligent man (and dope beatboxer might I add).

You were performer and speaker at the first Human Beatbox Convention in London 2003, and then organizer of the second convention in NYC 2004. What is the importance of these events for the beatboxing community, and how do you see these conventions developing in the future?

I see them happening but not until we all work to make it happen. I did not like the convention in NYC as far as organizing it because BBE did all of the planning, and I felt like from jump it should be a community thing... all of us. This is important if we are to have more conventions because we can all help, no matter where it is, we are all in the same game.

At the time of writing, the Human Beatbox Convention 2004 DVD is in production. How does this product differ from your last DVD product, 'Beatboxing and the Spoken Word'?

You know I look at the beatboxers in Europe and they are on the verge of making it. I mean touring, marketing, everything. But American Beatboxers are more experimental and theatrical oriented whereas Europe is more musically oriented, like many beatboxers in America are actors many college trained. I also see musical differences; Europe loves electronic music so beatboxers in Europe make beats that reflect that. America is hip hop oriented and pop but in NYC experimental is big as well as in San Fran’. I also see that a lot of European cats use a lot of American styles.

I like Archangel in the UK, he is original, no copying for him. Also Kwiz, you can hear them developing their own styles and you can't say they sound like somebody else. American beatboxers lose cred instantly if they do IYMOK in a live show and get paid for it! Oh that is wack! It’s biting. It’s weird to see that in Europe because if those cats came over here doing Kenny Muhammad then man, Kenny would be pissed. It’s already happened so that’s why none of us sound the same in NYC.

It’s like the rule - no biting, no biting style, get your own! Theirs might be hot but you can't use it or you will get dissed or challenged or both, and if you ask DOA to verify this; beatboxers in the 80's and early 90's battled for careers and you never were allowed on the stage in that corner or wherever. Beatboxers battled on rooftops, in the street. Culture is different than in Europe, somewhat territorial. Europe is more open, more sharing. But style means money, if you're doing my style right, and say you getting booked because you using my style? Oh hell no! You's a biter! but in Europe it seems like it's more like sharing.

But man, Archangel and K.wiz. Whew! Deadly! And Kela, he is original as well. You can tell its him. However, that cat needs to be more humble though, I mean he should be bigging up HUMANBEATBOX.COM like a mother, man, you guys carry that cat. He needs to show a lot more love to HBB and to a lot of the beatbox organizations. We respect him. But bring it down a little bit.

Shlomo. Oh my G-d. I cannot forget him - that is trance smoothness incarnated. That boy is nasty and sick with it! Unique as a motherf**ker. Shlomo should do a track with Taylor McFerrin. Man that would be off da chain! But do you see what I am saying?

Yeah too right! Which brings me to my next point. Which up-and-coming beatboxers do you think have the potential to become the new veterans of the beatboxing world and why?

Oh that list is long. You see, if all the beatboxers now stay with it they will be veterans. But if you quit, well you will be a has-been, and maybe someone will mention you in an interview just so they can sound cool and knowledgeable. Know what I mean?

Like, “Oh there was that good beatboxer name nervo but he quit, he was so good though. there is a recording of him somewhere”, and that’s the extent of it. All of us can be veterans if we are in it for the long haul. Not 5 years, but for life - money or no money, women or no women, whatever. You live to make music period and make music to live. It's a mirror.

You have beatboxed with some of the greats, including Kenny Muhammad and Scratch, but one highlight in your career must have been beatboxing along side Stevie Wonder. What was this like, and what did he make of the beatboxing?

Ohh he dug it and I have good relationship with his producer so I am happy about that. But you know who I am most honored to work with?

The Kernal. He is such a great guy, a real champion of beatboxing.

Coolio, what stuff you done with him?

Well not as a vocalist but as an organizer and web master, I hope to work with him.

You've recently become father to Psyence Lewis. Tell us what it's like being a dad, and is he destined to become a beatboxer?

I want you to know you heard it first. Psyence is going to lead a nation!

He will be a beatboxer but I expect him to be a politician, a scientist or both. I will raise him in academia.

You think he could become president of USA?

If that is the nation that he will lead then cool. But he will be a world leader, and that may sound arrogant. I agree. But that is a good goal to have a child strive for: excellence. To be the best he or she can be.

And to finish this interview - cats - small furry creatures that deserve a lap and a saucer of milk, or feline pests that should be trapped and skinned?

I am thinking...My wife is standing over me with a knife. The first one, the first one! I wrote it, honest. We have a cat you see. Sometimes we don’t always see eye to eye, me and the cat.

What is the cat called?

Could you take him in a battle?

Man I would kick that feline's... I mean I would never harm him. I mean her. Baby... My wife is trying to hurt me. Ok, so Isis is our cat. She is Gray and white, very slick, has a personality and bites you when she likes you. If she were a woman she would be that woman who is always talking and being arrogant with her nose in the air. She is spoiled, but that’s ok I am getting a ferret.

Any final words out to the Beatbox World?